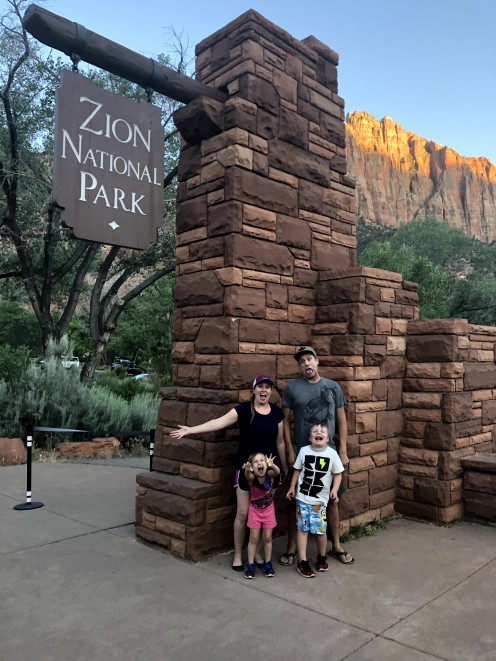 For our first Utah National Park on our summer National Park tour, we headed to the epic Zion National Park. We took a drive through the park from the east entrance, headed to the visitor’s center, which is near the South entrance, and we were blown away! After having been to the Grand Canyon where you are looking down into the canyon, it was really cool to get to driven into the canyon at Zion and to be looking up at the massive mountains. We rode the shuttle on this first day in the park to the lodge area, and hiked the 1.5 mile round trip hike to the Lower Emerald Pools, which had a small waterfall that the kids liked. 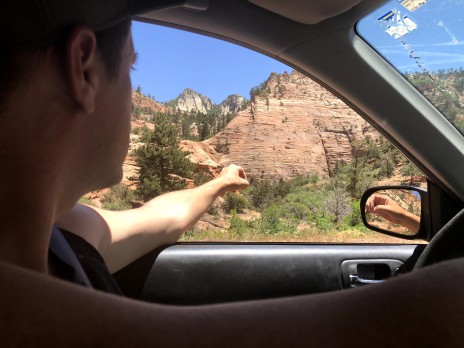 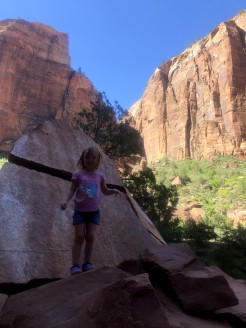 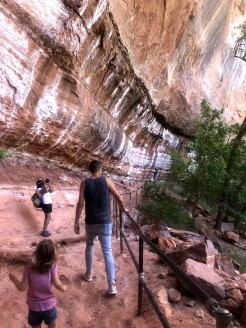 We went on a few more great hikes in our 3 days that we spent at this park. The second one was the Canyon Overlook trail on the east side of the park. It was a 1 mile round trip hike that was mostly along the cliff side, with some railings. It was a good hike for the kids to hold our hand and be able to do. The view at the end was gorgeous, and definitely worth the uphill climb. 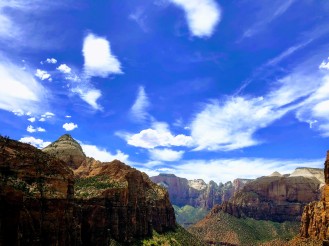 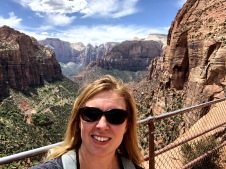 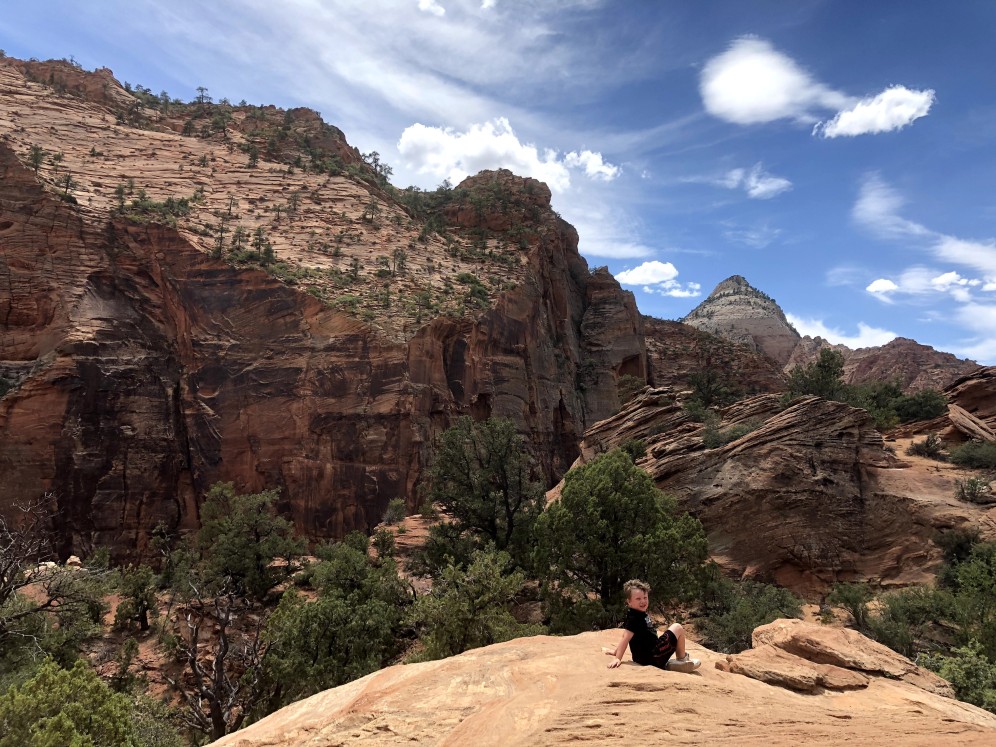 On our 3rd day in the park, David decided to hike Angel’s Landing. While he did that, the kids and I got some lunch at Zion Lodge, hiked the short walkway to Weeping Rock, walked up a small hill to get a better view of the 3 peaks called the Court of the Patriarchs, and then went to watch the movie and attend a ranger program at the Human History Museum. We also got the kids Jr Ranger badges while there. David met back up with us after his hike, and we headed back to the RV. 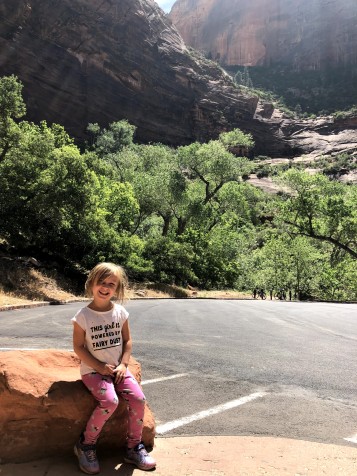 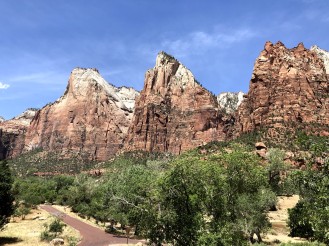 The next afternoon, we headed back into the park to hike the famous Narrows Trail. This trail is at the end of the shuttle route, and is a very popular, and busy “trail”. The Riverwalk Trail is about a mile long and leads to the Narrows, which is a narrow part of the canyon that you can hike through the water at when the water is low. It definitely helps to have the right shoes, and a walking stick for this rocky, and wet hike. The kids made a new friend their age on this hike, and it was their favorite hike that we have done so far. The Narrows go on for about 15 miles, but we were only in the water for about a half mile each way. After that, we headed into the cute town of Springdale, which is right outside of the south entrance to the park. You can walk in this town, get a hotel here, and take a shuttle from the park entrance around the town. We ate at Oscar’s Cafe and enjoyed a good meal there. We also heard that King’s Landing was a nice place to eat that we will have to put on our list for a future stop. 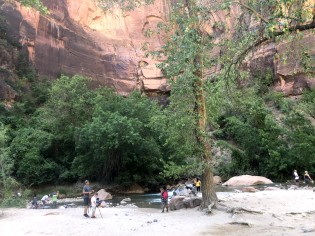 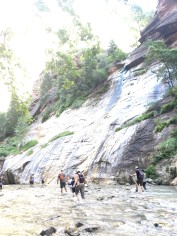 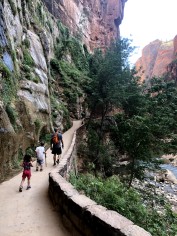 On this trip, since we were headed north from here, we stayed at a boondocking site 15 minutes east of the east entrance to Zion, about 15 minutes north of Kanab. It was a quiet site when we pulled in, until a truck randomly delivered 50 mooing cows into the fenced in area next to our boondocking spot. The cows were there our whole stay, but quieted down after that first night. The next day, the farmers brought in about 20 horses as well. This seemed like a temporary stop for them on a cattle drive or something like that. A few minute down the road was the Thunderbird Cafe. It was a diner type restaurant that specialized in ho-made pies as they say. We went there for dessert one night. I got the Apple Pie with rum sauce and added ice cream, and it was delicious. The kids got sundaes and shared some of David’s chili cheese fries, and Tyler said he was in heaven there. Ha! He is easily pleased I would say, but it was a great place for dessert at the end of a long day.

We also went to Moqui Cave down the road. The owner who was there told us the history of her grandparents buying the cave and turning it into a dance hall back in the 1950’s. Her grandfather was also into geology and there were many cool artifacts and fossils in the museum. The kids and I loved the gift and rock shops as well. It cost a small fee to get into the cave, but it was worth it, and the kids wanted to go back! 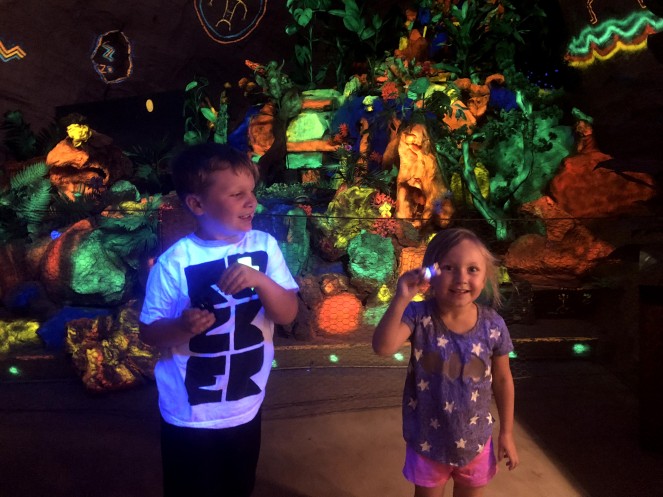 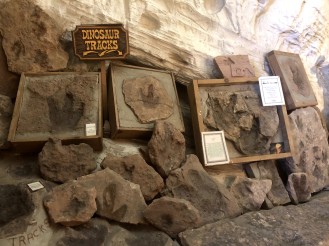 While in town, we also visited the Best Friends Animal Sanctuary, which is a large no kill shelter where many animals spend most of their lives. They have about 1600 animals at any given time that they are caring very well for. You can schedule a tour around the property, which we did. The kids enjoyed seeing puppies and cats, and we liked seeing the beautiful facility there and all of the good work they are doing for the animals there. 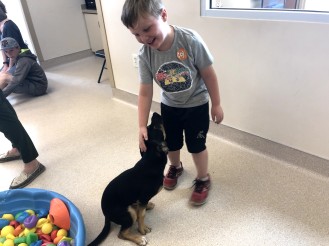 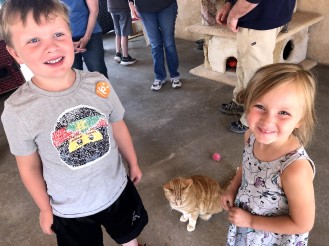 All in all, it was a very eventful time in the Zion National Park, and Kanab areas! Watch our video below for more about our time in Zion: